Thriving With Exercise and Prayer 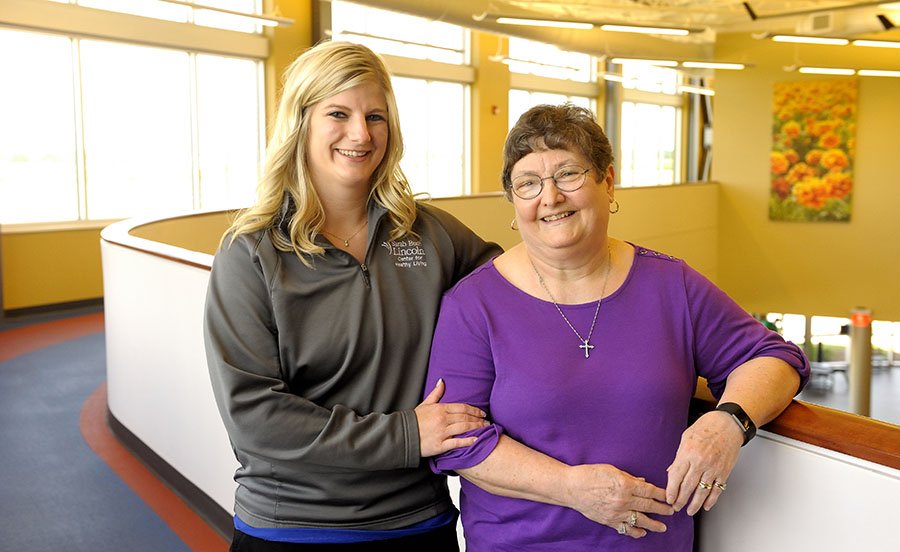 After surviving cancer, Dorothy Hortenstine is certain that exercise— and prayer— helped her to reclaim her health.

“It’s amazing what exercise can do,” Dorothy said. “I still have a ways to go, but I’m able to walk so much better now.” She credits physical therapists and trainers at the Center for Healthy Living at Sarah Bush Lincoln for helping her fight peripheral neuropathy, a nerve disorder that causes pain and weakness in her feet. It is a common side effect of chemotherapy.

Dorothy’s journey started in January 2018 when her doctor discovered a large mass in her colon during a routine colonoscopy. The Cooks Mills resident was diagnosed with stage 3C colon cancer, just a month after she lost her mother to cancer. Dorothy and her family were shocked and devastated by the news.

Aggressive treatment included surgery to remove a large portion of her lower colon, followed by six months of chemotherapy at the Sarah Bush Lincoln Regional Cancer Center. Dorothy admits that the treatments took an incredible toll on her body. “It was rough, and I’m still fighting the fatigue, but it’s a lot better than it was,” she said.

Medical Oncologist/Hematologist Kuppuswamy Jagarlamudi, MD, oversaw Dorothy’s care and adjusted her medication when chemotherapy-induced neuropathy starting causing ‘drop foot,’ a gait abnormality that made walking challenging. Dr. Jagarlamudi encouraged Dorothy’s desire to exercise with a personal trainer at the Center for Health Living, a new benefit offered to Sarah Bush Lincoln Regional Cancer Center patients through its Survivor Strength and Wellness program. “Dr. Jagarlamudi is so caring and he’s very smart,” she said. “Everyone at the Regional Cancer Center was so supportive and understanding.”

Following a one-on-one evaluation, Dorothy’s trainer recommended physical therapy to help Dorothy strengthen her muscles and improve her balance. Dorothy made significant strides during seven weeks of physical therapy— so much progress, in fact, that she was ready to keep the momentum going by joining a four-month training program offered through the Center for Healthy Living.

Dorothy faithfully attended training sessions three times a week for two months, twice weekly during the third month and weekly for a month. Exercise specialist Nicole Gardner served as her personal guide through her transition to better health and fitness, supporting Dorothy when her needs were the greatest and gently encouraging her to become more independent and take more personal responsibility as she was able.  “Nikki is so knowledgeable. When I started the program, I couldn’t even move my toes up and down, and those exercises really helped!” Dorothy said. “I have made a great deal of progress, and I am walking so much better. I’ve learned so much from physical therapy and the Wellness program, and I highly recommend them both.”

Dorothy was also on a mission to improve her high carcinoembryonic antigen (CEA) test number, a blood test used to help diagnose and manage certain types of cancers. A high CEA number can signal a greater chance for cancer recurrence. She had been discouraged after a CT scan in January 2019 revealed a few spots that Dr. Jagarlamudi was closely monitoring. “I was so upset about that, but it motivated me to work even harder,” she said.

Thankfully, Dorothy received better news following her April scan. “My last scan was clear, and my CEA number is normal. I feel great about that, and I think exercise and prayer had a lot to do with it – lots of prayers!” she said. Dorothy added that she will never forget Dr. Jagarlamudi’s reaction when he first saw her walk across the room after months of training. “He smiled and told everyone, ‘This girl is amazing! She has worked so hard,’” she said.

Dorothy looks forward to enjoying life on the farm with her husband of 46 years, Jeffrey, plus their five children and their families, all of whom she said she feels grateful for because of their ongoing support. Dorothy also appreciates “the little things in life” so much more, like being able to pick up a 24-case of water at the grocery store without needing assistance. “It used to be so heavy, but now I can do it easily,” she said. “It’s a simple thing, but it’s nice to do it so easily.”

Dorothy credits the Center for Healthy Living trainers for keeping her spirits up through the hard times. “I’m so impressed with them. They make you feel great from the moment you walk in the door until the time you leave,” she said.

Now committed to routine exercise, Dorothy joined Planet Fitness where she has continued to work out three days a week to stay healthy. She also heeds Gardner’s advice to keep her shoulders back and walk straight when working on her balance. “I have 14 grandkids and I just want to be around to see them graduate and get married,” she said.